You may wish to export your photos to an online service and recreate part of the original photo’s folder hierarchy.  You can do this for all photo services supported by the Photo Upload plug-in that allow Windows/Mac compatible folder hierarchies (i.e. folders and photos with sub-folders), e.g. Amazon Drive, Dropbox, Google Drive, OneDrive etc.

Notes about “export with sub-folder hierarchy”:

Let’s say you have your photos in a folder arrangement like this:

And you want to upload them to your photo service into a folder such as this:

To export the photos and keep part of the folder hierarchy you should follow the instructions for Uploading Photos – Export, but first specify one of the Export settings using the Setting button.

After opening the Settings window, tick the “Export sub-folder hierarchy” check box, and in the “Source base folder” text box enter the path (using the Browse… button) to the base folder of your photos. In this example it will be: 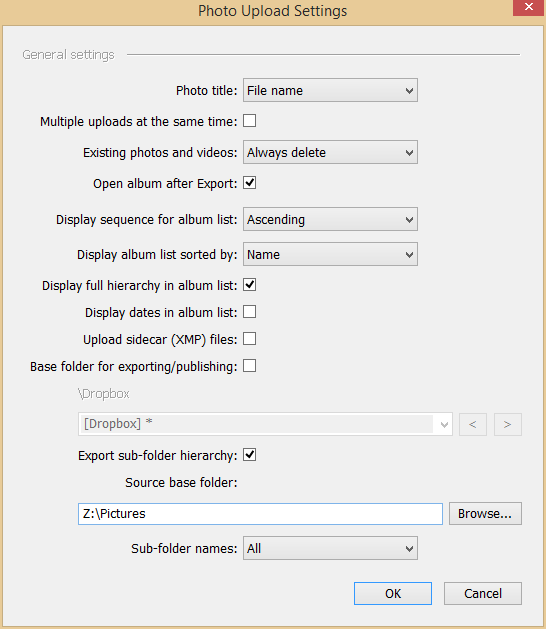 In the “Sub-folder names” drop down menu you can specify which of the sub-folders will be recreated during the export. Choose “All” to recreate all the sub-folders each photo’s path that follow the source base folder.

Close the Settings  window by pressing OK and then click the Export button in the Export window.

Choose the base photo folder on your photo service, in this case: 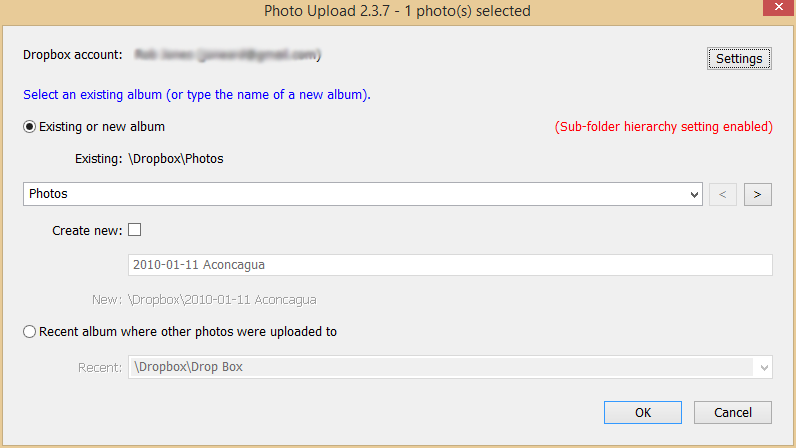 Choose OK and your photos will be uploaded to the photo service.

In this example they will be uploaded to the following: